One only needs to stand at Prospect Park and look over Providence at night to see local examples of the irrational exuberance of the recent housing boom. Few of the hundreds of new condos downtown are ever lit because barely anyone lives down there. With at least two large condo complexes still ostensibly under construction, it’s clear that Providence has a glut of high end housing that will likely sit empty for years. That said, it could be worse. At least the extra housing is in the right place, the middle of the city, and not miles away from anything, like many of the housing developments built in the last decade.

I just finished an extremely interesting article about how the economic stimulus money could provide opportunities around the country to redesign struggling cities. The article looks at competing visions for several cities – New Orleans, Los Angeles, Buffalo, and The Bronx – that aim to improve infrastruture, reduce reliance on cars, and reclaim public green space. Many of the plans also try to foster social justice by removing elevated highways that cut through neighborhoods (guess which ones). While there are certainly urban planning problems in Providence, the increased (potential) density downtown seems quite progressive compared to some other sprawl-inducing development plans. At least when things eventually recover, there will be plenty of existing housing downtown that should make Providence a relatively sustainable city. The developers will surely lose money on their buildings but I don’t think there’s much use in worrying about that at this point…

There’s been a lot of focus recently on how the geography of the future will be different from the sprawling, Levitt-esque suburbs we’ve been building thus far. The Atlantic recently ran a brilliant story about how the geography is inextricably tied to modes of capitalist production. Like many articles, it argues that the building we’ve been doing for the last fifty years is both shortsighted and unsustainable. But the ironically named author, Richard Florida, also predicts what kind of geography might be the most viable moving forward. Mega Regions, he argues, will be the best suited for the future by permitting low-emission lifestyles and providing the density required to incubate the creativity necessary to succeed in an information-driven economy.

Providence, it just so happens, is at the center of what Florida argues is one of the world’s premier mega regions: The Bos-Wash mega region. This is why I think the biggest key to Providence’s future success is something that the instate proposals of shovel-ready, stimulus-funded construction projects cannot reach: high-speed rail. There is some money in the stimulus package for high-speed rail initiatives but it isn’t enough and the current plan is to divide it too many ways. After traveling around Europe on the TGV this summer, I am quite enamoured with high-speed rail. Hopefully, Obama and Amtrak Joe will be able to make subsequent funding requests to build a true high-speed rail line in the Northeast Corridor. Providence will really need it.

Timothy Geithner’s/Obama’s bank rescue plan doesn’t give me a lot of confidence. Here’s why: 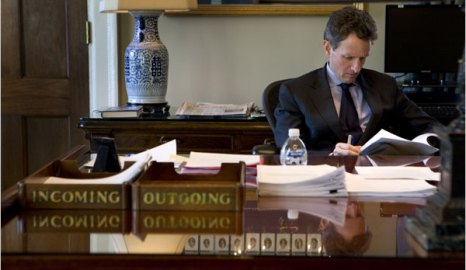 Paul Krugman has posted a few times in the past couple days about the bank rescue plan. He argues that the Geithner plan is treating this crisis in the wrong way. By propping up the prices of the “toxic waste” that is at the root of the financial problems, the plan assumes that these investments are basically sound, but the underlying value has just temporarily dived below a reasonable value. Krugman argues that this is a misunderstanding on the part of Treasury, since the problem here is the investments themselves: the result of a (largely poorly planned) construction binge the country can ill afford.

“if you think that the banks really, really have made lousy investments, this won’t work at all; it will simply be a waste of taxpayer money. To keep the banks operating, you need to provide a real backstop — you need to guarantee their debts, and seize ownership of those banks that don’t have enough assets to cover their debts; that’s the Swedish solution, it’s what we eventually did with our own S&Ls. Now, early on in this crisis, it was possible to argue that it was mainly a panic. But at this point, that’s an indefensible position. Banks and other highly leveraged institutions collectively made a huge bet that the normal rules for house prices and sustainable levels of consumer debt no longer applied; they were wrong. Time for a Swedish solution.”

Essentially, Treasury is betting that this crisis is merely the result of a panic that has distorted an otherwise functional market system. But Krugman argues the market itself is the problem here; to enact the necessary fiscal policies requires that the decision makers recognize the depth and bredth of the systemic problems in our economy.

It’s a shame that Congress hasn’t provided any leadership on economic issues. It started to react a bit after public anger seemed ready to boil over after the A.I.G. bonuses became news. Many commentators have rightly argued that there are more serious problems with the financial industry than these bonuses and that $165 million is a drop in the bucket compared to the total cost of the bailouts. Indeed, Spitzer, speaking from his moral exile at Slate, reminds us to be careful to peak behind the curtain here: A.I.G. bailout money has been funneled to a bunch of other firms (including Bank of America, Merrill Lynch, UBS, JPMorgan Chase, Morgan Stanley, Deutsche Bank, Barclays and Goldman Sachs), who are getting paid back 100 cents on the dollar for their adventures with the (morally) bankrupt company. But the public outrage at the bonuses is real and justified. There are quite a few things to be mad about right now, and desite widespread real, material pain for much of the country, there hasn’t been much visible anger about this situation. Of course the country is still feeling good because of the election, but we need to look at the economic team Obama has surrounded himself with.

There is still a narrow set of voices represented at Treasury (certainly not helped by the fact that Geithner is still working virtually alone). The recovery plan is being designed by the best and the brightest, sure, but it is the best and the brightest from the team that created the systemic economic problems in the first place. Greenwald argues the extent to which Goldman Sachs and its alumni are both the designers and beneficiaries of the bailout packages thus far is representative of the extent of true “oligarchic decay” in the governing and management of our financial system. I think he’s correct when he says this justifies real public anger; the hypercomplex, two-tiered natures of  contemporary financial apparatuses demand the vigorous public response our deading media has thoroughly subdued.

In Providence, I recently saw Les Énfants de Don Quichotte, an experience that really dramatized the difference between our political universe and France’s. The documentary followed organizers of a citizen’s movement fighting for a universal right to housing. Here, we see the Today show visiting Sacramento’s twenty-first century shanty town while thousands of area homes sit empty in foreclosure.

There should be some public anger here. The offensive A.I.G. bonus scandal has only been the most dramatically personal and was therefore able to catalyze a lot of vehemence. Instead of trying to repress this populist energy, I wish the fourth estate would articulate the true depth of the problem so there could be public consensus for bringing in new economic voices to initiate legitimate structural change.

And finally, the market response should not be used as the sole standard of economic health here. As we’ve learned from Jim Cramer, that’s a metric completely controlled by the people who both created and are now trying to fix this mess. In other words, the plan was designed for them, and it gives them trillions of dollars more to play with. I should hope that they’re happy.

I won’t argue that the piece I wrote for my BDH column this week was well written. But there’s something fishy going on with the BDH Opinions section. Allow me to explain.

On Monday, the BDH published a front page story criticizing Brown VP for International Relations David Kennedy’s ’76 agenda for the Watson Institute. He’s currently serving as the interim director of the Watson Institute and, according to the BDH, has been making some controversial decisions about the direction of the Internationalization Initiative. The article cited faculty opposition to Kennedy’s signature Watson global governance initiative. In particular, the BDH criticized the personal relationships between Kennedy and a few of his new hires. Worse, these new (non tenure track) professors only have Harvard J.D.s, not Ph.D.s! Other professors hurled accusations that Kennedy is trying to turn the Watson into a law school. The article included not only innuendo, claims acknowledged to be rumors, and critical statements from anonymous sources but also delved into his romantic life.

Later on Monday, I saw my friend Evan Pulvers, who is in one of the international law classes at issue. She told me she had written an Op-Ed response to the article defending Kennedy’s programs, explaining the value of her class, and criticizing the BDH’s reporting. Since I was not excited about my own column, I offered her my regular spot in the Op-Ed rotation this week. However, the BDH opinions editor is refusing to print Evan’s column until after break. (Apparently my space in the paper just disappeared this week.) At that point, it will be too late for the response to matter.

This is the most controversial and “hard hitting” story the BDH has run all semester. The paper must stand behind this story enough to print Evan’s response this week. That is a standard of the responsible journalism to which the BDH aspires.

Though in context it might have been justifiable to mention Kennedy’s relationship with Dan Danielsen, the implication is unseemly. International Relations Program Director Peter Andreas explained in Tuesday’s paper that their relationship is several decades old and not out of the ordinary at Brown, facts that were not clear from Monday’s BDH story: “Danielsen is in a romantic relationship with Kennedy.”

Andreas also explained that the article’s claims about possible elimination of the IR and Development Studies concentrations were factually incorrect. From what I’ve heard, the issue with DS in particular is not precisely a funding cut, but rather the end of grants that supported the interdisciplinary research and teaching initiatives that are the essential cores of the program.

I covered Internationalization for the BDH during the fall of 2008, so I’m familiar with David Kennedy and some aspects of the Internationalization initiative. Everyone from the Provost to Ruth’s office to members of the Internationalization Committee knew the value David Kennedy brings to the job. They hired him for his experience and his connections. (And it was expensive, don’t forget that Harvard Law School professors don’t come cheap. Just look at the number of positions listed behind his name on CNN.com) When I interviewed him for the BDH in October, 2007, the global governance initiative was the fous of our conversation. If the University didn’t want to start studying law, they shouldn’t have hired a highly respected lawyer.

Finally, I think Kennedy deserves the benefit of the doubt here. When I interviewed him, I was struck by his emotional connection to Brown (class of ’76). He emphasized how much he valued the uniqueness of Brown and its focus on undergraduate eduation. Though I am dubious of the University’s Internationalization agenda being an example of Brown trying to be Harvard, my conversation with Kennedy reassured me that even after spending many years in Cambridge he still understands the culture of College Hill.