“We tortured [Mohammed al-] Qahtani. His treatment met the legal definition of torture. And that’s why I did not refer the case” for prosecution.

Aside from an official admission of something everyone already knew, what is most interesting about this human rights embarrassment? I think we should focus on the definitional argument undergirding the administrative decision labeling these “abusive techniques” as too rough while other detainees’ experiences during stays at Gitmo and in foreign prisons after CIA rendition still remain undisclosed or unclassified as torture. Consider Crawford’s logic in deciding to call Qahtani’s treatment “torture” and halt prosecution:

Crawford, 61, said the combination of the interrogation techniques, their duration and the impact on Qahtani’s health led to her conclusion. “The techniques they used were all authorized, but the manner in which they applied them was overly aggressive and too persistent. . . . You think of torture, you think of some horrendous physical act done to an individual. This was not any one particular act; this was just a combination of things that had a medical impact on him, that hurt his health. It was abusive and uncalled for. And coercive. Clearly coercive. It was that medical impact that pushed me over the edge” to call it torture, she said. 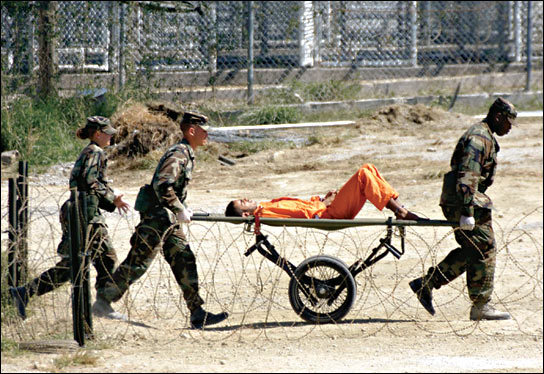 Thus, the medicalization of torture. It is a biopolitical classification right out of Discipline and Punish. While the purpose of torture is to trigger a psychological breakdown (this was certainly accomplished: “There is no doubt he was tortured,” Gitanjali S. Gutierrez, Qahtani’s civilian attorney, said this week. “He has loss of concentration and memory loss, and he suffers from paranoia.”) this definition sidesteps the psychic realm in favor of the more easily categorizable medical definition. Taken as the legally accepted category of “torture,” this policy would run into the same ethical problems as capital punishment, since doctors’ Hippocratic Oaths would seem to ban participation in torture. Were a licensed doctor’s medical opinion is required to render legally binding judgement on the limits of a prisoner’s human rights, these ethical dilemmas would become legal problems akin to the ones that caused the Supreme Court to issue stays on executions last year.

War is Peace, Freedom is Slavery, Ignorance is Strength, Scion is Creepy

As the country works together to fight off depression this winter, we’ll have to do without the usual excitement of the circuit of over-the-top auto shows. Even the revered Detroit International Auto Show is struggling, as Nissan (whose new ads feature the tag line “You don’t just need a car, you need a car company“) pulled out of the event and all the other manufacturers are cutting back on parties, catering, and models. GM is even trading in the usual wood floors in its exhibit for less-costly carpet.

Against this backdrop, there seems to be one company – or rather one marque of the no-longer profitable Toyota Motor Corp – that is still “cool:” Scion. Personally, I find their cars pretty ugly and they’re not fun to drive (I’ve rented the xB a few times through Zipcar). Perhaps their only redeeming quality in my eyes is that ?uestlove drives one.

Currently, viral marketing is all the rage (Dodge is trying to ignore the reality of non-existent truck sales by putting together a viral “reality” show with some real Americans) but there remains nothing more powerful than when customers spontaneously adopt a brand personality.

This is where Scion gets really creepy (start at 0:30):

I saw this Orwellian ad at during the previews before Milk. I thought it was more than a little unsettling, especially since I had recently read a NYT article about the devotion of many “Scikotics:”

From its inception in 2003, Scion, a division of Toyota, has made rampant use of grassroots marketing to recruit owners like Mr. Wong — young, enthusiastic, industrious — to be the hot-rodders of tomorrow. Encouraged by Scion’s keenly directed flow of marketing dollars, which not only support car shows and track days but also hip-hop concerts, fashion shows and exhibitions of graffiti art, owners have formed close-knit social networks in the real and virtual worlds, where Mr. Wong is the very model of an alpha Scion citizen.

Asked in an instant messaging exchange whether he goes to Scion meets, Mr. Wong replied: “All the time. I have one tonight, one Friday, Saturday and Sunday this week.”

This fanaticism brings to mind Marx’s famous quip about Ideology “They do not know it, but they are doing it.” Scion has successfully engineered a product that is meant to be incomplete. By opening up their cars to easy modification, Scion has created a brand that captures customers’ imaginations because they can be unique after buying the car. Obviously this is a common tactic among brand managers, but the genius here is how Scion parlayed this feeling into a need to continually buy new parts, continually pour more money into the car.

I don’t think it should ever be surprising that advertising creates this kind of mentality, but it’s the fanaticism that really gets me. If you don’t believe me, check out the comments on that youtube clip.